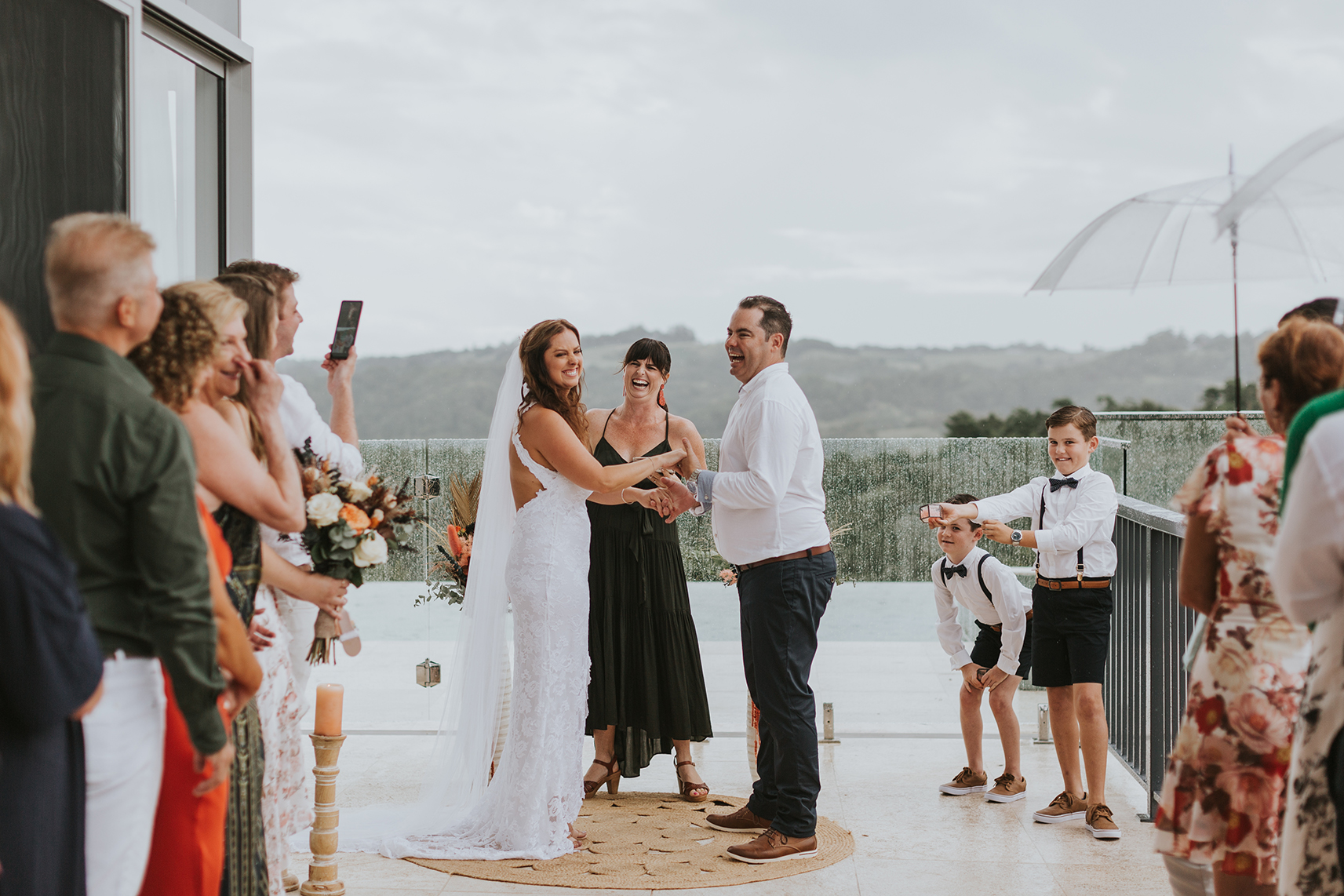 Paige and Brad were married at Tides Estate in the Byron Bay hinterland. They had organised for their ceremony to be around the big old fig tree within the macadamia orchard about 50 metres from the main house where their wedding reception was to be held but unfortunately, the endless Northern Rivers La Niña had other plans.

We studied the BOM incessantly and waited and waited for the rain to pass. Eventually we set up on the western balcony and held the wedding ceremony with just a little sprinkling of rain. Luckily, they only had a handful of guests, so it worked out perfectly, and really at the end of the day, does it really matter how you get married, as long as you’re with your favourite person?

How did they meet?

Paige accepted a position at Brad’s work in September 2017. Normally when you accept a position of work, you actually start working, but not Paige! She had far too many holidays and ‘bitches’ cruises to partake in first, so after enjoying herself on the high seas with her Mum and friend Ash, she quickly swapped suitcases and headed to Bali with her mate Rosie. After endlessly sunning herself, and almost killing her mate Rosie of a scooter, she finally started her new job!

Now Brad had just recovered from a broken ankle, after riding his son’s scooter, and during his recovery he got himself up to date on all the golf tournaments from 1843 to present day, and the girly trash TV including Keeping up with the Kardashian and The Hills – he felt he had enough info to be equipped to chat to chicks!

That’s why he was so surprised, when he found himself sat across from the gorgeous new girl at work, when she asked him a simple question, he responded by, running away!

It took them some time before they actually started hanging out, I mean Paige had other weekend’s away and holidays planned – she was a busy girl!

In those early days, Brad thought this girl was loud, opinionated, and straight to the point, and he was entirely intrigued by her. And Paige noticed this guy Brad, but not in the way you’d think, sure he had a sexy deep voice, he was funny and knowledgeable, but he wore this red shirt that made him look like he worked at Bunnings!

It took a couple of different events; a knock off drink at the pub on a Friday, to Brad running to Paige’s rescue when she left her keys at work late one night, until they just started hanging out a little more. Paige finding herself regularly falling asleep on Brad and drooling on his chest, to regular Wednesday Taco nights with the boys. I hear the boys would often ask way more than once when Paige was coming over again.

So that was it, they were a couple, and Paige just never left.

To Brad and Paige marriage is  about committing yourself to the other person. It’s being there in good and bad times… no matter what happens. Standing together and facing the world.

It is speaking words of appreciation and demonstrating gratitude in thoughtful ways.

It is having the capacity to forgive and forget even when it is difficult.

It is giving each other a space in which you can grow.

It is accepting each other as you are and the people you will become.

It is loving unconditionally and without hesitation.

Brad already had a family, so family is extremely important to these two. In those early days Paige, and Brad’s son’s, Ben and Josh, found a space where they loved to be with one another. And besides Paige always wanted to do fun things. This is something that Brad will always be grateful for, the way she’s become another Mother to Ben and Josh, and he’s looking forward to watching her thrive in that role.

I was so very lucky to be the Byron Bay marriage celebrant who married these two and formulated their little family, Ben read some lovely words he had written on behalf of himself and his brother, and they both formally accepted Paige as their Dad’s wife by yelling out loud ‘WE DO!’. We also had a little wedding crasher at the beginning of the ceremony, their old staffy Archie, who we thought would sleep through the whole thing, but he wasn’t missing any of it – IT WAS THE BEST!